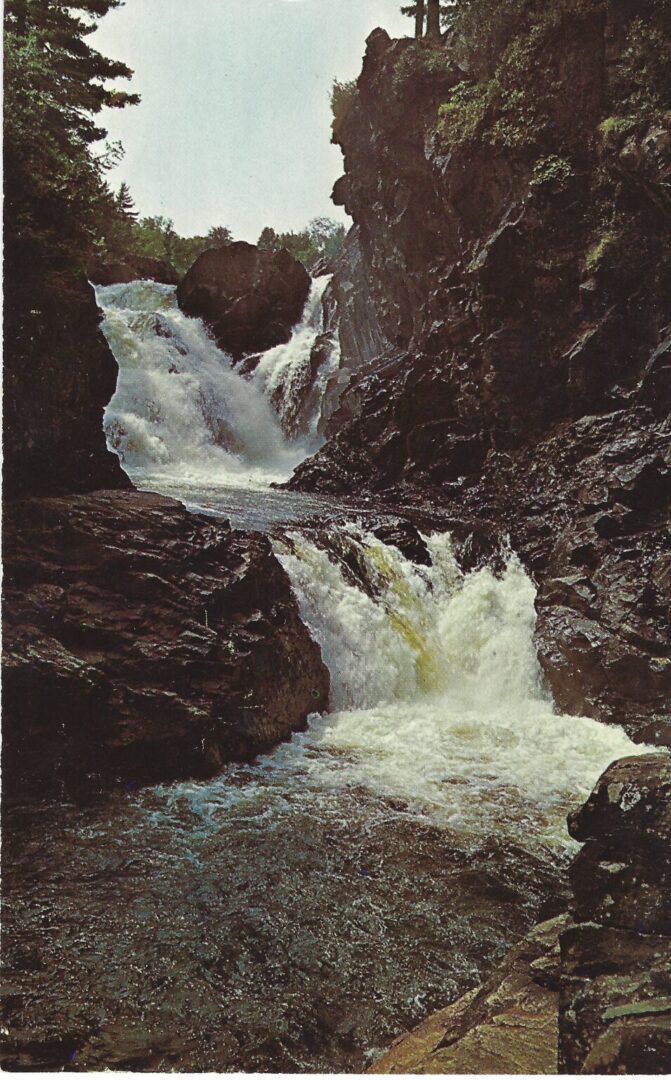 Many moons ago, in the hunting grounds of the Algonquins, on the heights crowned today by the village of Rawdon, lived an old Indian sorcerer, the wicked and all powerful Nipissing. A master of sorcery, Nipissing could score points with all the sorcerers of the other tribes, and the great council of the Sachems never decided anything without first consulting him. Strong, cunning, and evil, the sorcerer led the Algonquin clan at will. Many personal enemies had joined their ancestors for having displeased him. No one had dared to resist him.

In the same tribe lived the sweet Hiawatha. Daughter of Sachem, the incomparable dark-eyed Indian woman was as beautiful as the sunny day and as straight as a spruce. Her youth and beauty had captivated many hearts, but the terrible Nipissing loved her and no one would argue with her. Unfortunately for the wizard, Hiawatha was no longer free because she had given her heart to another. She had a master.

Born on the banks of the giant river at the confluence of the Qui-Marche River, the young Algonquin had lived among the whites and among them had listened to the Black Robe, Father Jogues (Saint Isaac Jogues), later martyred; the latter had spoken to Hiawatha about the true Manitou. The one who loves and forgives, the one who gave himself to death so that we might live. Captivated by the figures of Jesus and Mary, Hiawatha had inquired and soon believed.

Baptized, she was profoundly Christian, moreover, she had, like the good sisters who had come from so far away France, given her heart to this master so good, promising to keep it always. The young Indian girl could not and would not enter the “wigwam” of the great sorcerer. But young Hiawatha was a Christian, Nipissing was not, and he did not care for such nonsense.

One evening at the council, when the pipe had been passed around the dancing red flower three times, Nipissing stood up draped in the red and white linen blanket. The great Manitou no longer wants to see his sorcerer alone on the road. Hiawatha will accompany him. Three more times the pipe swallowed at the lipped mouths under the eagle’s beak nose, and the oldest of the Sachems articulated with a grimace, “The Great Manitou is wise, Nipissing will no longer walk alone.” The wizard was engaged. All that remained was to prepare the magnificent ceremonies and dances that would forever consecrate the union of a Sachem’s daughter with the all-powerful messenger of the Manitou. Hiawatha, however, did not hear it that way. Distraught, she prayed intensely and asked for help from God, to whom she had entrusted herself, and then decided to tell Nipissing about her wish. The sorcerer laughed, then mocked her before threatening her with death if she did not change her decision. Hiawatha felt lost. Suddenly, she had an idea. As a daughter of Sachem, she had no right to refuse marriage but to choose her husband. She had only to choose someone other than Nipissing, for example Arondack, her sworn enemy who undoubtedly understood Hiawatha’s promise, because he was good. Thus the young bride would keep her heart intact for the Grand Master.

The young Algonquin woman made her decision known to the Council of Sachems, who bowed. She claimed a traditional right that did not belong to the Sachems to make her disappear. Nipissing, informed, made a black anger, rushed to the fire of the council, swore to make sink the clan under its evil spells if the young Indian girl did not marry him… then withdrew defeated, the hatred in the heart and the insult in the mouth. Hiawatha, however, did not marry Arondack.

Nipissing, a devious sorcerer who was always listened to at the council of the Sachems as a messenger of the Great Manitou, launched the Algonquins on the path of war. If Nipissing had counted on the hazards of battle to get rid of his enemy… he had sworn well… The war was disastrous and Arondack returned to his Wigwam dying. Hiawatha, engaged by his choice, and moreover since she always attended the sick of the tribe, stood at his bedside and prepared the infusions of plants which she gathered herself in the surrounding wood.

One day, lacking plants and moving away from the camp to collect some, Hiawatha went towards the deep Dorwin precipice, at the bottom of which a thin stream of brackish water was flowing. A few sarsaparilla roots ran along the edge of the chasm. The young Algonquin bent down to pick them. Nipissing, lying in wait, saw her.

All resentment flooded into his Indian heart. Without thinking, in front of this easy prey that was offered to him, he hurried and ran after her. With a sudden gesture, he threw her into the abyss and then bent down to see her frail body shredded on the rocks. He laughed ferociously, savouring his revenge, but… he saw nothing. He would never see anything again.

No sooner had Hiawatha’s body touched the thin stream of water than the precipice vibrated with a thunderclap and a magnificent waterfall gushed out and rushed into the narrow gorge, where she has been leaping and singing ever since. Nipissing, stunned, stood still and was immediately turned to stone by the Great Manitou and condemned to hear Hiawatha’s song of victory for centuries to come.

Today the stone wizard can still be seen peering down into the chasm and the fine white dress of Hiawatha shines with a thousand sparkles under the sun. If you listen carefully you will hear the song of victory that the bouncing waterfall keeps humming. The brown rhizomes of the sarsaparilla now line the walls of the waterfall as a reminder of Hiawatha’s kindnesses.

The Indian Head is clearly visible at the to right hand side.

Whether this is actually an Algonquin Legend or one made up to advertise Rawdon have researched. I leave the choice to the readers.